Most users often encounter pop ups while browsing the web through a computer. This can be annoying at times, as it can divert the user’s attention from the topic they are currently searching on the web and it also makes their browsing experience undesirable. Pop ups are now becoming more prominent on the web as it had become a rather alternative yet effective way to offer targeted advertising to the users. Most websites on the internet now display pop up ads when a user tries to navigate from one page to another.

Pop ups have evolved not only in computer based internet browsing but also to mobile platforms. As a result, more pop up ads gets displayed on mobile devices when users are searching through different websites during web browsing. Pop ups are displayed usually when a user accesses unsafe websites with no security features. In most cases, these type of pop ups redirects the browser to sites that contain explicit content or to harmful web pages that in turn causes the entry of malware and other malicious programs to the computer.

Removing pop ups is highly necessary especially if one wishes to enjoy an uninterrupted web browsing experience. This is possible only by carrying out various tweaks and other adjustments in the browser and the computer. This is where Instant Tech Support can help, as our expertise in secure web browsing will provide the necessary means of protection to the Internet browsers for both businesses and individuals.

What are Pop Ups

Pop ups are windows that appear on top of the web page visited by a user. They generally display advertisements that cover the entire window of the web page, which makes them highly obtrusive. Advertisers use pop ups to divert the attention of the users to persuade them in buying certain goods or services. Pop up ads appear when a user navigates to a certain page on a site or moves the mouse pointer across a specific portion of the page.

Nowadays, pop ups have become more advanced and are displayed according to the navigational behavior of users on a certain web page. Initially, pop up ads were used to promote adult websites and illegal software downloads. However, they are now used to advertise a range of products and services from automobiles to insurance. Pop ups, which were first introduced to the Internet by the 1990s attained widespread usage by the 2000s. Over time, pop ups became the most unpopular form of digital advertising among users.

Why is Pop Ups Harmful

Ever since its introduction as an alternative method to online advertising, pop up ads have remained highly unpopular among users. Most users who have experienced pop ups will know how annoying pop ups can be when they appear on the screen of your computer while browsing through websites. They are an intrusive form of advertising that interferes with the user’s web browsing experience. Various studies have revealed that about 95 percent of computer users found pop up ads to be annoying and are against their presence on the web. 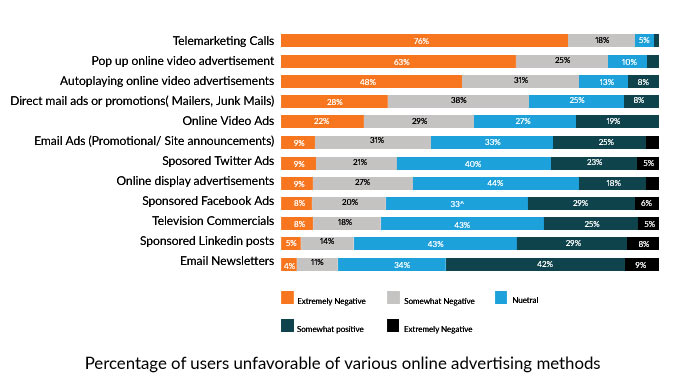 The above stats clearly indicated how pop up ads and other forms of online advertisements negatively influence customers. After telemarketing calls, online pop up advertisements are viewed by 63 percent of the users as negative and annoying to their web browsing experience.

Some of the issues of repeated pop ups are:

Pop ups hinder the experience of a user in browsing the web. They appear in front of the browser window covering the entire content of a website and troubles the user. Moreover, it will discourage users from visiting sites that have too much pop ups.

A majority of the pop ups are misleading and at times, they redirects the user to potentially harmful websites. This may result in the entry of malwares and malicious programs to the computer when the user clicks on them. Some of the pop up ads also display explicit content from adult sites and therefore makes web browsing potentially unsafe especially for children.

Most of the pop ups are click baits that prompts the user to click on the site for the sole purpose of increasing the page views. Most of this pop ups are misleading and they often redirects the user into viewing pages that have literally no content or with offensive and explicit content.

The appearance of repeated pop ups may also decrease the internet speeds of a user considerably. They will also result in the slow loading of websites and they might also cause issues with the performance of the computer.

Why Pop Up Blockers are Ineffective

Pop ups are becoming increasingly prevalent in the internet and this has urged many users to install pop up or ad blockers. They are programs that block pop ups from appearing on the browser window. Pop up blockers can be easily integrated into any web browsers and are therefore used by many to remove pop ups while browsing the internet.

According to the above graph, it is evident that most users install pop up blockers because they find pop ups to be annoying and intrusive. Disruption of browsing and slow load speeds comes only second. Security and privacy is also a major reason why users prefer pop up blockers on their browsers.

However, it is worth noting that pop up blockers are not a permanent way to deal with pop up ads. Some of the pop ups will easily bypass the filtering employed by a pop up blocker and gets displayed on the browser window. Moreover, most of the pop ups that appear now are a result of any hidden spyware or other malicious software in the computer. In this case, a pop up blocker is ineffective since it can deal only with online pop ups.

Importance of Pop Up Removal

Removing or preventing pop up ads from appearing on a computer is helpful especially if one wants to enjoy an uninterrupted and safe web browsing. It is more important in today’s context where there are so many ads in the internet. By removing pop ups, the user is promised with a safe browsing experience as it will prevent redirecting him/her into any potentially harmful sites.

Any spyware or malware infection in the computer can also cause pop ups to appear on the browsers while accessing the web. Removing them from the computer is the most effective way to remove pop ups from appearing and in making the computer more secure. This is because most of the spywares that causes pop ups secretly collects user data and sends them to anonymous sources over the web that can compromise the user safety.

How Instant Tech Support Can Help

At Instant Tech Support, we use several tools that can detect spyware or other programs that causes pop ups to appear in a computer. This malicious programs are then selectively removed from the computer that will prevent any pop ups related to spyware. Moreover, our expert personnel at Instant Tech Support focuses on online pop ups and use several techniques such as altering the browser settings to prevent pop up ads from appearing on computers used in homes or businesses. So, get in touch with us to know more on pop up removal.